Higashi Gyoen in Imperial Palace is eastern part of the palace and open to public for free.
Three gates are available. Ote-mon gate, Hirakawa-mon gate and Kita Hanebashi-mon gate.

Stop by an exhibition room near Ote-mon gate.
There're old guard houses, too.

You may hear striking sounds and shouting loudly from the other side of the hedge.
Don't worry. It's just a Kendo (Sword fighting) training hall.

2nd enclosure has a Japanese garden with a pond and a waterfall.
Wild forest is maintained as is, too. It's interesting to compare well trimmed Japanese garden to wild nature.

Main enclosure is on the high side of the park.
There's a stone mound ruin of castle tower.

Wide open space is in front of it. There used to be main buildings on this wide open lawn.
All buildings including castle tower suffered fire in early Edo era.
Castle tower hasn't been rebuilt after the fire.

Edo castle has many episodes.
There's a monument to show where Matsu no Roka was.
Mastu no Roka is a hallway with pictures of pine trees on the wall in the main building of Edo castle. Famous incident known as Chushingura drama happened here.

Also famous O-oku was here, too. It's a kind of Shogun's harem.
O-oku was the area with only females. There were more than 1000 women working in this area.
Only male who was allowed to get in here was Shogun. 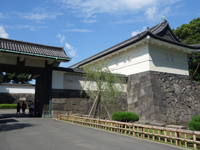 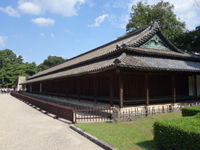 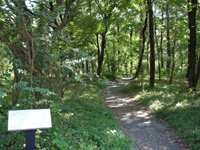 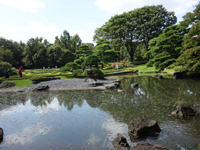 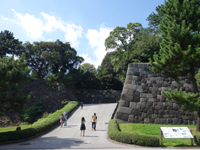 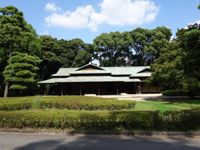 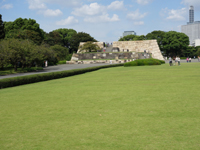 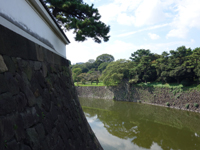 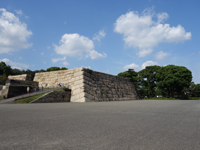