You'll see some policemen on the street around Hie Shrine since this shrine is located right next to the Office of the Prime Minister.

As a shrine in the center of Tokyo, this shrine has escalators to get to the top of the hill.

This shrine started in late 15th century and moved into Edo castle (Current Imperial Palace) when Ieyasu Tokugawa took over the castle to start Edo era.

After a big fire in Edo, it's moved to current location in late 17th century.
Edo people call this shrine "Sanno san" as their god to protect them.

The celebration of this shrine is called "Sanno Matsuri" and considered the most gorgeous celebration as well as "Kanda Matsuri" of Kanda Shrine. 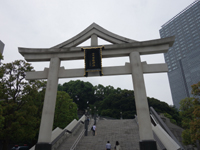 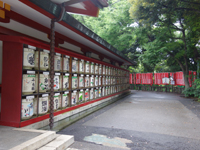 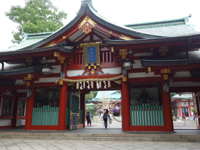