Most of temples have more than 500 years history but many of them were located in Edo (Tokyo).

All temples were relocated here mainly in 1920's.

Majority were relocated after Great Kanto Earthquake in 1923.

Some of them were relocated due to urbanization in Tokyo like construction of subway or development of buildings. 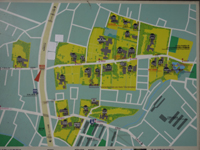