This shrine was established in Edo era but nobody knows detail history.
It was transferred to Hie Shrine temporarily while this area was redeveloped.

Current shrine was rebuilt in 2014.
So it's pretty new but very small. May be the smallest shrine I've ever seen.

Saiwai means happiness.
But nobody knows how this shrine was named like that. 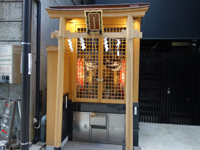